Thermo King Customer Johnson Feed is all about family, partnerships and service.

To say Johnson Feed, Inc. (JFI) has come a long way in its 100-year history is an understatement. What started with a horse and wagon dray service in Fairview, South Dakota in 1920 has become a nationwide provider of refrigerated and dry goods with 375 employees, 220 company trucks, 124 owner operator trucks, and 875 reefer trailers.

Odds are good that Great Grandpa Carl Johnson would be proud of the company he started and his family who continues the legacy today. “He didn’t even have a driver’s license,” said Todd Johnson who along with his brother, Mitch, have equal duties in running the modern-day Johnson Feed, Inc.

Not that he needed a license, as it wasn’t until the early 1930s that Carl’s son, Cliff, added a single straight truck to the business to provide local hauling of grain, feed and livestock to area farmers. He also added a hatchery and feed business. The company grew more in the 1950s and 1960s when Cliff’s son, Darvin, expanded operations with a warehouse, more trucks and eventually added some trailers and long-haul capabilities. Darvin’s wife, Martha, did much of the back-end office work, and their sons joined the business in the early 80s. 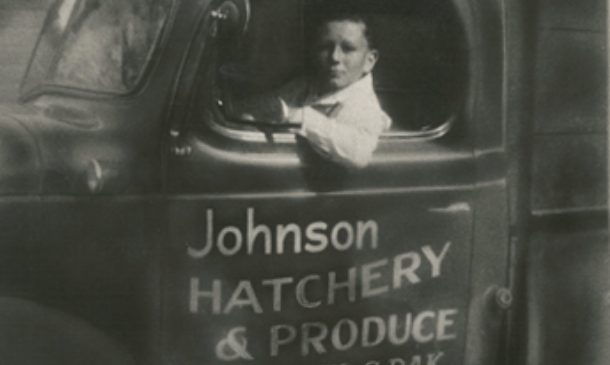 “I think my dad, who passed away at age 51, would be pleased to see our business today,” said Todd. “He, just like the generations before him, took pride in the services we provide and in treating everyone – our customers, employees and partners, how we want to be treated. I think that, along with a strong Midwest work ethic and a reliable fleet have contributed to our longevity.”

Carrying on the family tradition with modern equipment and reliable partners

Now going on five generations strong with several of Todd’s children working for the company as well, JFI has its sights on the next 100 years with a dedicated staff, modern equipment and continued organic growth based on customer demand.

Much of JFI’s growth over the past 35 years has come on the refrigerated side, which has grown from two reefer trailers in 1985 to 875 today, the majority of which are refrigerated by Thermo King units. “We are located near many protein plants so we haul a lot of meat. A quality fleet with modern technology and equipment is essential to protect our loads and keep our drivers comfortable. Thermo King of Sioux Falls has been a great partner in helping us do just that,” said Todd, “and they operate with the same values and honesty that we do.”

They also have the family tradition aspect in common. Owned by Lyn and Ann Tschetter, Thermo King of Sioux Falls has been family run for several generations as well.

“Johnson Feed is a great customer to work with, and they are simply great people,” said Pete Halverson, general manager at the dealership and son-in-law of the Tschetters. “They put customers and employees first. It shows in the way they run their operation and in their fleet choices.”

This includes adding the Thermo King TriPac® Auxiliary Power Unit to their company trucks, which Todd believes plays into their low driver turnover rate. “The TriPac is a big plus when it comes to driver comfort, particularly for our over-the-road drivers who are travelling all week long.”

The majority of JFI’s Thermo King fleet consists of Precedent® S-600 and C-600 model units with approximately 50% having TracKing® telematics and ThermoLite® solar panels activated. “It’s crazy how technology keeps changing, and we understand the importance of keeping up – it’s part of the reason the average age of our fleet is 2 ½ years hold. We generally trade out every 5 ½ years with the APU being the exception as we reuse them on a second (and sometimes third) truck. The resale on the Thermo King equipment is excellent,” said Todd.

“Thermo King of Sioux Falls is one of the reasons we are where we are today – both they and corporate have been great partners. We get reliable products and service – and the support on the road with the huge nationwide network.”

That appreciation goes two ways and the Thermo King of Sioux Falls team took the opportunity to show it by presenting JFI with a specially wrapped refrigeration unit to commemorate the company’s 100-year anniversary milestone.

“It didn’t really surprise me that they would do something like that – that’s the kind of partner they are,” said Todd. “They value family milestones as much as we do.”

Get To Konw Johnson Feed INC. 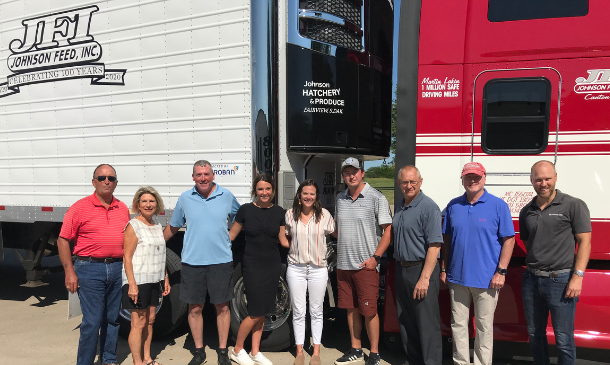 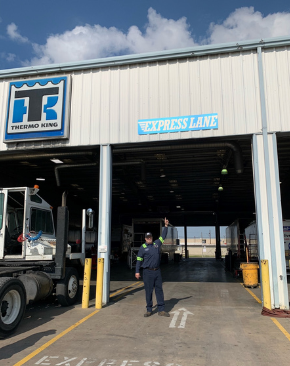 Several hardworking technicians were nominated based off their work ethic and strong representation of the Thermo King brand to take part in a Technician Spotlight. They highlighted the best parts of their jobs and how they got to where they are today.

Masked and Ready to Serve!

Thermo King dealership family does its part to stop the spread of COVID-19.