Promoting CHANJE in the East

Dealers host mini-roadshow to highlight the future of electrification

“There are tremendous incentives that certain cities, including New York City, are offering companies to adopt electrification into their fleets,” said Mike Rudnick, owner Thermo King of Long Island. “Many cities’ regulations are citing zero emissions by 2025. That’s not that far off. We need to continue showing our commitment to electrification and the technology being developed to ensure that we lead the way.”

And that’s what three dealers – Thermo King East, CSTK East and Thermo King of Long Island, did in May, when they hosted a mini-road show featuring the Chanje all-electric refrigerated van prototype that was developed in partnership with Thermo King. The 100 percent electric vehicle was first unveiled in Minneapolis back in March.

It was manufactured by Chanje Electric and is equipped with a Thermo King refrigeration unit and solar panels. The vehicle is being deployed to refrigerated fleet customers who will incorporate the vehicle into their current operations for a series of rapid experiments, which will garner valuable data that can be used to progress the electrification of our portfolio.

The all-electric prototype vehicle was to be featured in the April Home Delivery Show in Philadelphia but had to drop out due to limited booth space. “When I heard it was going to be in our area, I wanted to take advantage,” said Frank Pryzwara, district 2 sales manager for Thermo King. “Our dealers have been hearing that major chassis OEMs were looking to introduce electric powered vehicles, and this was a great opportunity to show the market that Thermo King is not only engaged in electrification but is on the cutting edge.

“And it was a great start! Through just three open houses, the perceptions have changed in the East; we’ve become the company to talk to about electrification. Customers are contacting our dealers for advice and asking us about timeframes for the possible purchase of electric units and vehicles.”

Thermo King of Long Island welcomed approximately 70 folks to enjoy a catered sausage and pepper lunch while getting an up-close look of the Chanje van. “We had a great turn-out and all the OEMs and leasing companies were represented along with a variety of customers,” said Joe Glasson, general manager. “Several took test drives and offered good feedback on the vehicle including the need for better protection of wires and batteries from the snow and ice exposure in our region.”

Next, the Chanje van headed to Carlstadt, New Jersey, where Thermo King East hosted an event at a hotel just five minutes from the dealership. “Despite it being a cold and rainy day, we had the major OEMs, dealers and key customer show up to see what the future looked like,” said Tom Commorato, general manager. “One was even interested in becoming a Chanje dealer – they really liked how quiet the technology is; noise is another big issue in the city.”

“We also had several customers chomping at the bit to try the van out for several days. The interest is there. The number one question was related to range - 80-100 miles would be the sweet spot for this particular vehicle and the technology today, so some customers fit the mold, and some don’t. The exciting part is that range will continue to evolve with the technology. It’s important to show that Thermo King is in the mix and working on alternative energy solutions for customers –the rules and regulations will only get more strict, and we need to be ready.”

The final stop was at CSTK East, where the team held a three-hour lunchtime event that attracted the “influencers of buyers and specifications of both vehicles and our units,” said Jamie Cressman, general manger. “The Vehicle-Powered (VP) market continues to grow so fast here – from customers with 1-2 vehicles, to those with 5-6 vehicles.

“All were pleased to see that Thermo King is on the forefront of electrification offerings. It’s no longer a question of ‘if’ electrification is coming, it’s ‘when.’ By highlighting the Chanje vehicle – and the innovation 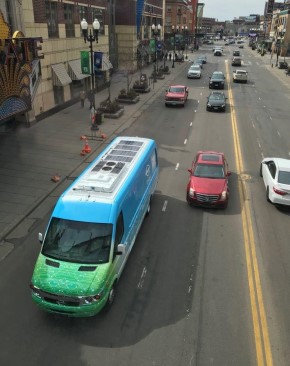 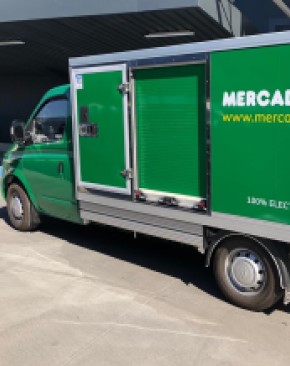