Some new light has been shed on how to enhance the performance of battery-powered auxiliary power units (APUs), and it was right there above us all along. Using solar panels mounted to the roof fairing of a tractor can produce enough power to extend the operation of a battery-powered HVAC system and hotel load power for an additional three to four hours. A 300-watt roof fairing-mounted solar panel can also power the liftgate and maintain the charge in the truck’s primary batteries, according to Jeff Kauffman of Tahoe Ventures, who was speaking at the FTR Transportation Conference in September.

Even a smaller, 65-watt panel (measuring just three feet by 1.5 feet) can generate 250-400 watts per day, enough to reduce parasitic hotel loads and run telematics, at an acquisition cost of less than $600.

Kauffman said it’s time for fleets to begin thinking about new ways to incorporate solar power, and one of the greatest opportunities is to extend the capabilities of battery-powered APUs, which often don’t last the entire duration of a driver’s 10-hour rest period. 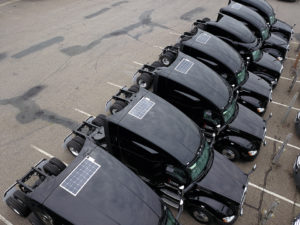 It noted solar panels designed for the transportation industry are thin and flexible, and able to be installed against the curve of a roof fairing, for instance.

“The roof fairing of the tractor has historically gone unused and has ideal access to sunlight,” the report read.

But not all solar panels are created equal.

“Customers go out there, go online or to Canadian Tire and get a panel for $100 that looks like it’s going to do the job. It comes down to the design for the environment. The solar industry only ever designed for stationary applications, they never had to worry about going down the road, vibrating, 70 mph winds, rock debris, tree limbs, corrosion. All that stuff destroys your standard solar system very quickly and a lot of people don’t understand that.”

Kroes said Thermo King designs its solar panels to last the entire life of a trailer, or 15-20 years, and there have been continuous improvements made to the design.
Steve Carlson, director of sales and business development with power inverter supplier Xantrex, agreed that solar power, coupled with a lithium-ion battery, is a good option when running battery-powered APUs or inverters. Currently, diesel-powered APUs dominate the market because they can run indefinitely without draining the truck’s batteries. However, diesel-fired APUs still produce noise, pollution, and consume costly fuel. They’re also restricted in some areas.

“Battery-powered APUs have historically been at a disadvantage – especially when operating in the summer in southern states,” Carlson wrote in a recent white paper on the topic. “They simply can run out of juice, then the trucker will need to fire up the main engine to keep cool, while recharging the batteries. What’s more, it can take six to 12 hours to recharge the batteries for an all-electric APU, either by running the truck engine or plugging directly into an outlet.”

Thermo King offers both battery-powered and diesel-fired APUs, but in Eastern Canada the diesel variety accounts for the majority of sales. But the company says solar can provide a benefit in those applications as well.

“It’s still a big advantage for diesel-powered APUs,” said Joe Rabak, national parts and procurement manager for Thermo King Eastern Canada. “We offer a solar solution for customers operating diesel-fired APUs, but the benefits are different. For electric, it’s extending run time and if you have a diesel, you’re trying to minimize the amount of time that diesel APU has to run to do its job.”

Kroes went so far as to say “You don’t want to ever spec’ an electric APU without a solar panel.” He said a solar panel not only extends its run time, but also battery life.

Carlson’s preference for lithium-ion batteries is derived from their ability to allow the system to use almost the entire charge, whereas traditional lead acid batteries should not be drained beyond 50%. They also provide about twice the cycles compared to lead acid batteries and are about 60-80% lighter-weight.

Regardless of the battery type, solar remains an option for powering the truck without idling.

“As an OEM for the trucking industry, we’ve been promoting solar for years because it simply makes a lot of sense,” said Carlson, noting that sensors and electronic devices continuously draw power when the truck is turned off. “Adding a solar panel – even a small one that can trickle charge and offset parasitic load, helps to keep charge levels stable.”

And in addition to extending the idle-free run time of an APU, solar panels also reduce the load on the alternator the next morning, which results in fuel savings.
Henry Albert, an owner-operator in the U.S., is a big believer. He runs eight batteries, four of which power his Parksmart electric HVAC system.

“They cost me hundreds of dollars each, so I’d like them to last,” he said of the batteries. He uses the eNow solar system to keep the batteries topped off so they are never in a discharged state.

“I think this has already extended the battery life and should continue to extend it,” he said, adding he expects all eight batteries to last three to four years. He’s counting on an 18-month payback due to reduced battery issues. And he’s also pleased with his ability to extend the run time of his Parksmart.

“My truck is my home away from home and I have a lot of appliances, communications systems, and telematics,” he said. So far, he hasn’t encountered any mechanical issues with the solar system.

“Inclement weather, extreme temperatures, truck washes – nothing has reduced its performance,” he said. 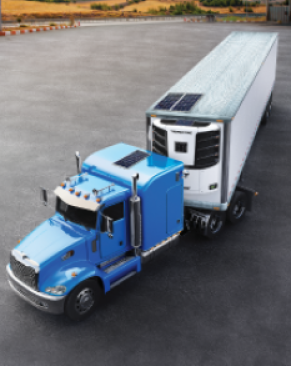 Long-time Thermo King customer Martin Brower Brampton Canada is all about trying innovative products that have the potential to increase fleet efficiencies while supporting the company’s green initiatives. 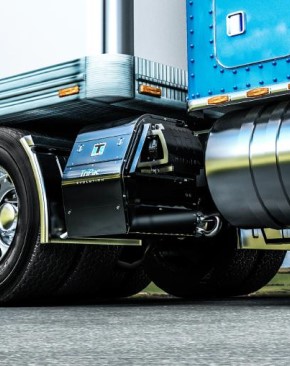 ThermoLite® Solar Panels paired with diesel APUs like the TriPac® Evolution can be an effective solution for situations where the tractor is stationary and must support small power loads during active or off-duty periods.